My next release, The Alpha's Justice, is part of the Bad Boy Alphas series featuring different authors writing about their favorite bad boy shifters. Below is my cover, an excerpt and giveaways for signed paperbacks, hundreds of dollars in giveaways as well as swag bags.

NOTE: The Alpha's Justice is on preorder at the moment. Subscribe to my newsletter if you would like to be notified when the book is available. The sign up form is in the right side bar over here--------------------->

Drum roll please! Here it is! The cover for The Alpha's Justice. Believe it or not, I looked at over 5,000 stock photos to find this couple. Hopefully, you like it! 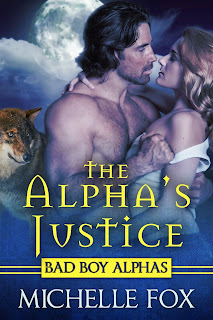 
What’s an alpha to do when he’s found his fated mate, but she reacts to the news by kicking him in the balls?

Gretchen Halbmond became a diehard Daddy’s girl the day her mother ran out on them both. She doesn’t believe in love and isn’t looking for it, but when her ailing father is attacked and left bloody by wolves on the wrong side of the law, she goes out in search of what she does believe in: Justice.

Sheriff Talon Garde has way too much on his plate. Humans have breached shifters' carefully guarded privacy and are about to go public. If he can’t stop them, what happened to Gretchen’s father is going to be the least of everyone’s worries.

More importantly, despite Talon’s rep as a bad ass alpha whose growl strikes fear in the hearts of criminals, Gretchen’s scent makes him go all squishy inside. She’s THE ONE, he’s sure of it. There’s just that small matter of convincing Gretchen it’s pointless to fight fate…and surviving the way she fights it.


Standalone novel with NO cliffhanger.

“What was that?” She pushed at Talon’s shoulders, trying to get him to pay attention.
“Huh? What was what?” He mumbled the words into her breast and then swallowed more of her nipple, his tongue going back and forth over the tip.
“Talon,” she said, fighting not to succumb to the delicious sensations Talon had stirred in her body.
“Yeah, say that again,” He said, his voice thick with lust. He’d given up on her belt and was now trying to cram his hand down her pants.
An animal chuffed in the dark, the sound as derisive as a human snort. The hair on the back of Gretchen’s neck stood up and a shiver crept up her spine. There was no mistaking that sound. A shifter was out there, watching them and thinking it was funny.
“Come on, Sheriff.” Not knowing what else to do, Gretchen whacked Talon on the head.
He winced and ducked. “Ow. Why do you keep hitting me?”
“Because when there’s no blood in your brain, it stops working. I’m just giving you a little kick start, so pay attention. Please.”

Available for pre-order on:

(Book will be live next week.)

THREE GIVEAWAYS!
GIVEAWAY #1: Click to win one of two signed paperbacks via a Goodreads Giveaway.

GIVEAWAY #2: Enter for a chance to win a $50 Amazon gift card and one of two swag packs courtesy of Michelle Fox.
a Rafflecopter giveaway


a Rafflecopter giveaway
Want to have a howling good time? Visit the other blogs in the hop!
Posted by MFox at 9:48 AM 11 comments:

First World #werewolfproblems. On the challenges of being a shifter (also a giveaway!)

Today is the launch of the #werewolfproblems meme. More than a dozen authors have contributed to the project and to celebrate it's debut we've got a fun giveaway going on. 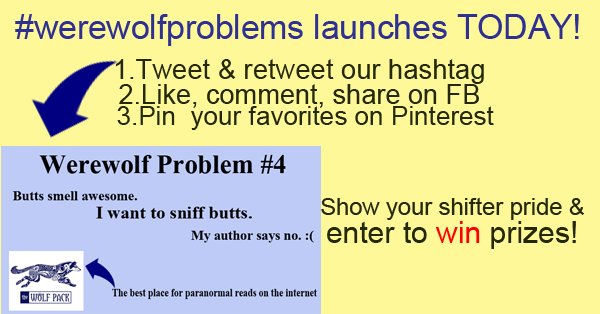 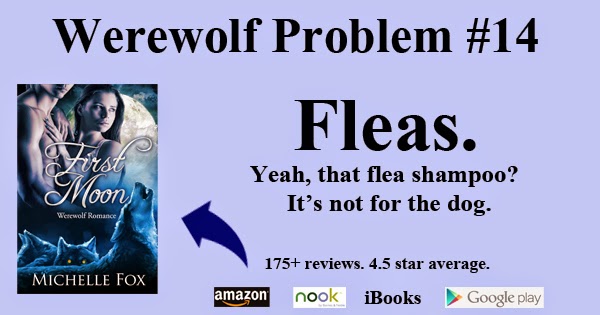 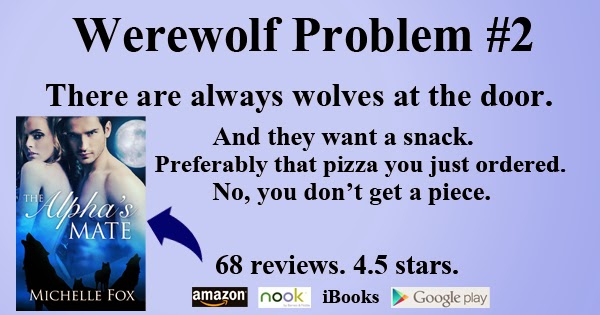 Full length novel. No cliffhanger!
Little known fact about being a werewolf: There are always wolves at your door and some of them are up to no good.
Chloe Weiss' dreams have finally come true: She's a null no more, her wolf has finally come. She's now a full member of her pack in the remote Appalachian 'weretown' of Hunstville.
Even better, she's mated to the pack's next alpha, Jackson Swift. However, now that she's on the other side of her happy ending, things aren't quite as rosy as she'd expected.
The women of her pack resent her status as alpha's mate and suddenly there are rumors that Chloe is an Omega, a werewolf so weak they are banned from ever mating. Worse, an old friend of Jackson's blows into town full of disapproval....and competition. It seems no one likes Chloe except Jackson.
Then women start disappearing, violently kidnapped from their homes and never heard from again. There's a killer on the loose in the small town of Huntsville, and the one wolf he'd do anything to have is Chloe.


Now Chloe will have to fight...for Jackson, her place in the pack, and her life.

"I loved this story, it is so emotional for these two. I love the growth that Chole has shown since the first time she was introduced. She went from thinking she was a null to the Alpha's mate and she demands respect. This has so many twists and turns and keeps you guessing what will happen next. I loved it."

Googleplay
Posted by MFox at 2:22 PM No comments: