What happened to Anna Lowe in Vegas...didn't stay there!

Anna Lowe has a Charmed in Vegas book, Gambling on Her Dragon, coming out next week, so I sat down with her and asked her to tell us more about her story. ;)

Ha! My own real-life Vegas story is ridiculously tame. I drove to Vegas from the Arizona ranch I was working on (the inspiration for my Twin Moon series, in fact) and spent the night at a friend's house nearby. Unlike Trey Dixon, the wolf shifter hero of my story, I'm not much of a gambler or card player, so I risked exactly one nickel in a slot machine to be able to say I've played Vegas, and that was it! Otherwise, I had a great time wandering the sights – like the Luxor's fake Nile and the pirate battle at Treasure Island. I was sad to see the magnificent white tigers on display at the Mirage, though. The people in Vegas are all part of the “sights,” and many funny observations I made snuck into my Charmed in Vegas story, GAMBLING ON HER DRAGON.

What inspired your story?

At the time you asked me to write  a Vegas-based PNR story, I had two series going. One is a PNR series called The Wolves of Twin Moon Ranch and the other is my Serendipity Adventure Romance series. While both include a lot of action, the Serendipity stories really are high-octane adventure romances. I've been dying to write a cross between those two series for a while, and this was my chance! The result is GAMBLING ON HER DRAGON, in which the characters go from high-diving off a hotel balcony to a gargoyle chase to being trapped by an enemy wolf pack and finally, being thrown into a fighting pit run by vampires. But don't worry – there are just enough breathers mixed in to let Trey and Kaya get up close and personal, too!

What did you enjoy most about writing this book?


GAMBLING ON HER DRAGON was one of those stories that just flowed from start to finish. I got totally swept up in the zany world of gambling shifters in the same way that Trey Dixon and dragon shifter Kaya Proulx get swept into trouble. One of my favorite scenes is the one in which Trey and Kaya confront each other in the scorching Nevada desert outside the city not long after their one-night stand (or what they thought would be a quick one-night stand). She's just stolen the $90,000 he won at poker, and he's taken her 1962 Jaguar roadster in revenge. It's a prickly situation, especially since poor Kaya has just shifted out of dragon form and is badly in need of clothes which she left behind at the hotel. Trey gives her clothing back piece by piece. “Undies?” He grinned, swinging them on a finger. She snatched them and yanked them on as he rooted around in a backpack. “I think I have a bra in here somewhere…”

Gambling on Her Dragon is live next week, but you can pre-order it now if you want to read it the second it's out.
99 cents!
Amazon US / Amazon UK / Amazon AU
iBooks / Kobo 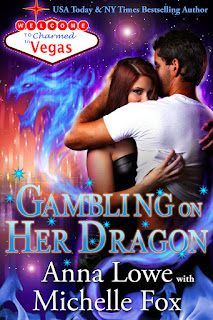 Win a free copy of Bad Potions from Amazon! 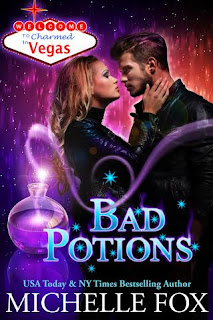 There's an Amazon Giveaway for my new release, Bad Potions.
30 copies are up for grabs. Super easy to enter! 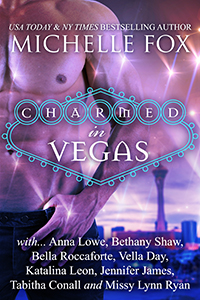 Get ready for a Vegas experience that rivals The Hangover!
Consider this FREE boxed set of steamy excerpts your travel brochure written just for YOU by your favorite paranormal authors.We have witches, dragons, werewolves, genies, vampires, cougars and more, all gambling with their hearts! Sexy love scenes, high stakes and all bets on love win BIG! You've never seen Vegas like this! Come take a peek at the adventures waiting for you! Place your bets and hang on tight, it's going to be a bumpy ride!