There Are Things in the Walls of this Place


For those who haven't heard, we bought an 1860 farmhouse that needs a pretty significant overhaul. It's a lot of work, but the house was affordable and my husband is handy. We are doing almost everything ourselves and relying on the hubby's expert network of friends who are also plumbers, electricians, carpenters etc... (Thank goodness for friends!)

We've taken about 80% of the first floor down to the studs (which I don't even think are studs actually, but whatever version of studs they had in the 1860s) now and little bits and bobs of things have been falling out of the walls.

Here's a re-cap of what we've discovered so far.

Not pictured: A half burned book that mentioned witches. I couldn't make out what book it was, but it wasn't a bible. So right there, you know the walls are spooky.

We think this could be a tool for darning socks. Or maybe the knob of a lid to a cooking dish. No one really knows. It tumbled out of a defunct chimney we took out of the walls. 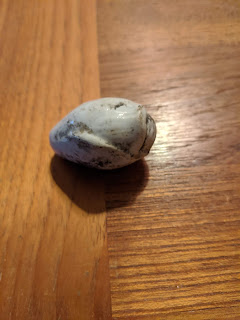 This is an old pharmacy bottle we found. It's apparently sort of unusual and we've had interest from bottle collectors, however, we plan to keep it. 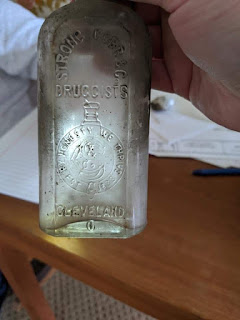 And this is probably why you're really here...the sex figurine. We found this naughty bit in the wall of what will be the kitchen. Apparently crude sex figures cast of metal have been a thing for a while, but I can't find anything that explains how they were used. Did people make their own or was there a company supplying these? What did you do with them? Give them to a lover? Gag gifts?  No one seems to know! 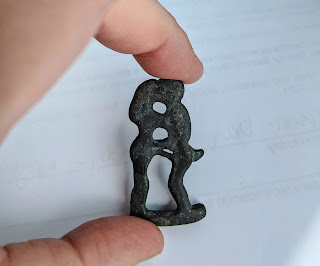 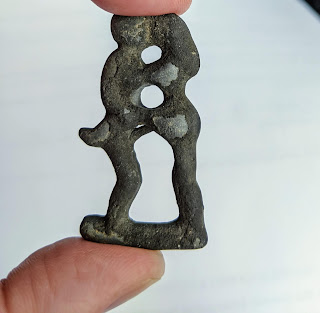 PS: In book news, I have a new release here (with witches!) and another book (with dragons!) has been nominated for a RONE over here. Spoiler: Nothing falls out of walls in either of these stories. Perhaps that was a mistake!
Posted by MFox at 8:36 AM