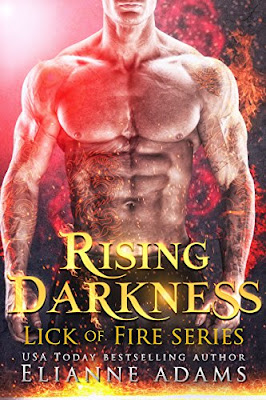 He cannot die…
The phoenix will continuously rise from the ashes. For Zenon, this is his ultimate curse. Left to rot at the end of a chain for millennia, he is desperate to end the suffering of one horrendous demise, and rebirth, after another - to finally find peace. Desperate for anything other than his fated life of solitude. Desperate for his true death.

She cannot live…
Tormented by an unrelenting heart affliction, Nickie has to endure dying repeatedly. The physical pain of death is eclipsed only by the paralyzing fear of when her heart will stop beating next… and whether or not this time will be the last. That is, until she learns the myth of phoenix shifters, and the healing power they have over their human mates.

Together they could be everything…
An evil is rising. One more powerful than any the phoenix shifters have faced before. If Zenon and Nickie cannot convince the others to help, the pain they’ve already endured will pale in comparison to their future.

Unless they can convince the other phoenixes to help, then all humanity is lost.

Black, roiling clouds spun overhead, casting the day into darkness. The constant rumble and crackle of electricity in the putrefied air should have terrified Zenon. After centuries of captivity, he recognized the storm for what it was. A cover. Something was coming. Something strong. Powerful. Dangerous. But he was at peace. What was the worst that could happen—lightning would strike the metal rod he was tied to in the middle of the field like a forgotten dog? The creature that had somehow found him would chew at his bones until there was nothing left? He’d died through it before. Pain, like everything else, was fleeting. Once your heart stopped, nothing hurt. Until you lived again. Only then was the agony unbearable once more.

The scent of decaying flesh filled his nose, burning like acid in his lungs. He wasn’t the only creature held in that mortuary of a pasture, but he was the only one to live on with each passing season. Most died within weeks. The dragons were heartier. They lasted a few years—sometimes more—but eventually, they too, went to their final rest.

His animal didn’t give him that luxury. No matter what, the phoenix lived on. When the body gave out—in a blast of flame and glory only he was there to witness—he was reborn from the fire and ash. Magically returned to his prison. Alone. Chained. Useless.