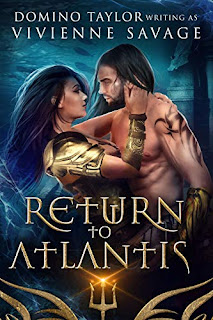 Manu fights against the Gloom for Atlantis. As the general’s son, he carries the weight of a thousand expectations on his shoulders. When a priest of the ocean goddess discovers that their princess survived the ambush that killed her parents, no one but Manu is more qualified to retrieve her.

Two decades after she was found on a beach, Kailani has dedicated her life to ocean conservation. Her early childhood may be a mystery, but discovering she's a lost princess sounds like a lunatic’s fairy tale. She’d rather stay on the surface...

In small leaps, Kai made progress that week. It still wasn’t enough.
“Decent,” Manu said at the end, clicking his stopwatch. She’d been overjoyed weeks ago to discover such technologies still existed in their realm.
“What’s my time?” she asked him.
“Don’t worry about your time.”
“What’s my time, Manu? I want to know it.”
He sighed and led her from the racetrack to the armory. They each claimed a trident before entering a vacant sparring room. The barracks had several, built for training in focus groups as needed. “One minute, thirty-nine seconds.”
“Thirty-nine seconds of failure,” she concluded, deflating.
“It isn’t failure.”
“It is until I beat the requirement,” she muttered, rubbing her neck.
“Princess.” She glanced up into compassionate brown eyes, so very expressive and open it startled her into silence. He took her by the shoulders and squeezed with both strong hands. For that moment, she was captivated. Lost. Those eyes were all that mattered. “You’ve made greater improvement within seven days of training than you have in the weeks since your arrival. There is only so much a mer can be expected to master in limited time. You’re harder on yourself than you must be.”
“I want to succeed.”
“I understand that. But even our Myrmidon recruits receive a year of training.”
“I don’t have a year to do this.”
He sighed and dropped both hands, the loss of their warmth distracting her. “Please put those back.” When he blinked, heat surged to her face and she hastily added, “If you don’t mind. My shoulders are tight from all of the weapons training and that kind of helped.”
“Ah.”
And then, without asking anything more, Manu maneuvered behind her and returned both hands to her shoulders. He squeezed lightly at first, introducing her to a blend of pleasure and pain. “Ow, ow, ow. A little left with this hand,” she muttered, tapping his fingers with her right.
“Here?” His thumb kneaded into the juncture of her shoulder and neck.
And it was magical. Within a few seconds, one of the worst kinks loosened.
“Fuck yes,” she murmured, rolling her neck to one side and sighing. The man’s hands were absolute bliss. The last time she’d received a massage as good, she’d been dating a hot machinist’s mate during a naval deployment, a sailor with hands strong enough to tighten nuts and bolts without tools. But he’d still known exactly how much pressure to use, never hurting her.
And at that moment, her brain decided to recall that her body owned a vagina. It wasn’t the most convenient moment to remember such things, but her imagination decided to wander from the platonic act of him kneading her shoulders to wondering how his fingers would feel in other places.
Between her legs. Skimming her naked skin. Squeezing her breasts. Inside her.
His breath stirred her hair, sending goosebumps prickling over her arms every time she imagined his lips touching the nape of her neck. Not for the first time, she wondered what it would be like to sit on his face instead of trying to punch him in it. Her nipples tightened harder than glass beads.
God. She must have been seriously hard up for a lay to fantasize about Manu of all people. The man didn’t have an ounce of interest in her. And from what she’d once interrupted, she thought he had a woman. To distract from the flourishing, unwelcome thoughts flooding her body with need, she cleared her throat. “Manu?”
“Hm?”
“There’s something I’ve been wondering. My true name is Zephyrine. It’s Greek.” She peered at him through the reflection in the wall.
“Yes?” Though he canted his head and gave her a look that suggested he thought she’d gone crazy. Maybe she had.
“And yours is Manu. That isn’t Greek. How does a mer from Atlantis end up with a name belonging to another culture?”
“Many of our people have close ties to Pacifica,” he explained. “Though their gods are different.”
Her brows rose a mile.
“The limited number of high mer required many of our ancestors to broaden the gene pool by inviting nobles of the other underwater kingdom to our city. My mother’s family hails from their region and emigrated from Pacifica as part of your grandfather Maui’s royal retinue. He was a prince among her people. Our people.”
“Maui. As in the god Maui?”
“He was a great mer, but not the actual god Maui. A descendent.”
“A descendent of the actual god Maui, who married my grandmother, a descendent of the goddess Thalassa.”
Manu shrugged. “We can’t choose who we love,” he muttered, the comment sounding like a loaded statement.