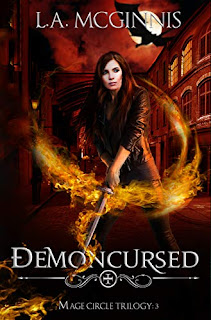 Alexis Hawthorne would give anything to have her old life back. Even her role as a demon soldier in Rhiannon's legion of warriors was an improvement over where she is now. Chained up in the Mage Circle's dungeons.Cole West came to New York with the clothes on his back and a boatload of secrets. Too bad he can’t tell anyone who—and what—he really is. But being sworn to secrecy by the Queen of the Fae means he has to keep his word. Or die.As Alexis fights to survive, Cole West hasn't given up searching. When he finds the Mage who took her away from him, he’ll burn the Circle to the ground.Even if it is made out of marble.
Posted by MFox at 10:01 AM