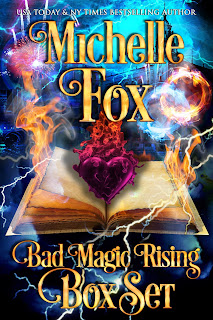 Being a supernatural bounty hunter requires more smarts than magic. Which is lucky for me since my magic is about as good as a leaky cauldron.When my latest client--a kleptomaniac werewolf--disappears, I'm on the hunt to drag him to justice. It should be a simple track 'em and cuff 'em operation, something I've done a hundred times before.Instead, I somehow acquire a vampire sidekick, wake up in a ditch, and become Shifter Nation's new chew toy. It's not fun, but it's all survivable right up until I'm accused of being in cahoots with my skip trace to steal Witchdom's most wanted magical relic.Suddenly smart isn't nearly enough to stay alive.Stephanie Plum meets Twilight...all the fun, twice the fangs. Full length novel.