Interview with Linda Robertson and Giveaway of Jovienne! 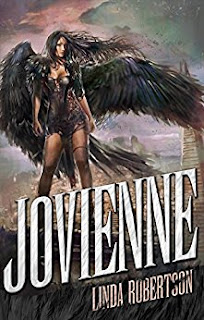 God made me an angel. I’m going to kick his ass.

Please welcome Linda Robertson! She's stopping by my blog today to discuss her new book Jovienne which is an amazing Urban Fantasy about angels and demons. Linda and I have known each other forever and she writes fantastic stories. You don't want to miss her books!

Michelle: I love Jovienne, the heroine of the series. She has such a strong sense of self and is very determined to carve her own path. I think, usually in angel/demon stories, getting the wings is the 'happily ever after' but not for Jovienne. She questions God and fights what is expected of her. How did she come to you? Did she just show up one day and start talking or did you build her piece by piece?

Linda: About 15 years ago (give or take) Jovienne started as a short story and, as you noted predictably, ended when she got her wings. I cried and cried as I wrote; it meant so much to me. You know that old writer’s adage, ‘kill your darlings’? Unlike other stories of mine up to that time, I tried to kill her. Instead of planning a fight she’d win, I worked at defeating her and threw the absolute worst I had at her. And she would not give up.

Regardless of my love for that short story, it was rejected. (Due, perhaps, to the predictable ending.)

But as they say… Nevertheless, she persisted. Jovienne stayed on my mind and I knew her story wasn’t over.

Michelle: Jovienne is a total bad ass. What was the one thing she does in the book that you think was the most bad ass?

Linda: She is so imperfect. Born into an abusive home, then orphaned by a car accident and afterward raised in poverty and near solitude, she trained constantly. She isn’t a valedictorian from an affluent home. She doesn’t have all her shit together.  She’s God’s cannon fodder meant for the front line of His war against demons. But training for combat isn’t combat, and without experience facing an actual enemy, she makes mistakes she has to live with. But in spite of all her doubts about everything she feels inwardly, she refuses to let that uncertainty immobilize her outwardly, so, to me, the most badass thing she does is trust herself to do the right thing.

Michelle: What is the quintanumin? Can you explain a little about how it works? How did that come to you? The fight scenes are so vivid when she draws on its powers.Things slow down almost like 'Crouching Tiger, Hidden Dragon' and then there are unexpected surprises in the middle of the action.

Linda: The quintanumin are five super-human abilities given her by God before waking from the coma. She can alter her sight to zoom in, alter her hearing to amplify, call ‘ghost hands’ from her aura to feel things she can’t physically reach, she can ‘quicken’ to run fast and make impossible leaps, and there is an energy release that allows her to mark an object with her essence to either leave a trail for others or to follow an object on the move.

Michelle: Jovienne is set in San Francisco a few years in the future. What made you choose that setting and time period?

Linda: At the time it was originally written, I’d recently moved back to Ohio after living in the Bay Area. While there the ‘Tenderloin’ area of San Francisco was often on the news due to crime and poverty.  I set it at Easter to facilitate the stigmata character’s movement, but I’ve adjusted the actual date over the years to have that holiday hit as early in April as possible. I wanted her surroundings in this first part of her tale to be as dead as possible, so it had to be spring, before the plants began to really renew and turn green.

Michelle: There’s also Polynesian magic in the series. How did that come about? Where on earth do you research that so you know you got it right?

Linda: Hold onto something, there’s a rabbit trail here and it gets bumpy.

I didn’t want her to be pale and blonde as many angels are portrayed. I also had fallen for the name Jovienne. It’s of French origin, but I didn’t want her to be European, so I looked at French Polynesia to make the connection of that lovely name and a main character with olive skin and dark eyes and hair. From there, I developed her history, including relatives who moved from an island in the South Pacific to Hawaii. What this means for Jovienne is that her heritage shaped parts of her power. She is sensitive to the shift from light to dark, and each evening she hears drums that no one else hears - an indication harkening to her ancestors who danced on beaches.

The language of her magic is based on Hawaiian, and while the use of it in the text should convey the sound and feel native to the islands, it was never verified. So it’s likely only jibberish that, I hope, transmits the correct nuance for the readers.

Michelle: There are several characters in the book that eventually all converge in San Francisco. We have Nathan who has stigmata and hates it, Araxiel the demon who wants more than Satan wants to give, and Andrei the mentor (or pedagogue as he is called in the book) whose failures ruin lives. They each have their agendas, secrets and quiet horrors. Did they all arrive in your head fully formed? Was it difficult to balance all the alternating scenes? Did you outline or pants the book?

Linda: Egads, no they didn’t arrive fully formed! (laughs) In effort to compare and contrast Jovienne against others, they each represent major facets of her. Nathan hates what he is, as she hates what she’s become. Andrei is broken in many ways, but unlike her, doubts stop him. He finds solace in intoxication, she finds her in the search for knowledge. Araxiel knows exactly what he wants and has planned for it, whereas she is caught in a knee-jerk reaction to a new situation and trying to sort it out.  Balancing the scenes for this story, with a countdown driving it, became simply a matter of sequencing the moves of the pieces on the chessboard to heighten tension.

As for my style, I started writing as an over-outliner, shifted to a pantser, and have come to the realization that for me, a rough outline sets my mind at ease and leaves me the freedom to explore as the first draft unfolds.

Michelle: You're also a talented musician and created a 'movie score' for Jovienne, which is AMAZING. Did you compose the music the same time you were writing the book? Which took longer to make? The score or the book?

Linda: I wrote most of it concurrent with the book, in order to get the tone of scenes that were troublesome. The words flowed more easily when the music made me feel ‘there.’ That said, I only recently obtained the programs and ability to work with the music on the computer. This allowed me to arrange the songs, and enhance them to a much more professional level.

The book took MUCH longer to complete. I can usually write a novel and push it through 3 drafts in 6 - 9 months. I composed the songs on a Yamaha PSR 740, with 16 track built-in recording. It would take typically a day to compose a song, and then I’d tweak it over the course of a week. Feeding those compositions into the new computer, arranging and creating the enhancements, then mixing and mastering it, ALL WHILE LEARNING PROTOOLS, took a month. I’m eager to do more, as it is a profoundly incredible tool and I know I’ve just scratched the surface of all that ProTools can do.

30 second samples and buy or download link for CD: http://www.authorlindarobertson.com/buy.html

Michelle: How many books are planned for Jovienne and when will the next one be out? Any hints of what comes next?

Linda: There is no set number of books in the Immanence Series yet, but #2 (as yet untitled) is set tentatively for release May 2018. No hints, but I am excited to show her growth as a character.

Michelle: Tell us about your other books and where readers can find you.

Linda: The Persephone Alcmedi series has (so far) six novels, available as paperbacks or ebook from Simon & Schuster, Amazon, etc. *The first and third books have sold out of paperbacks and are available as POD. In order they are:

Being a witch doesn't pay the bills, but Persephone Alcmedi gets by reading Tarot cards, writing a syndicated newspaper column and kenneling wærewolves in the basement during full moons. Everything changes when one of Seph's friends is murdered. The high priestess of the local coven offers Seph an unbelievable sum to hunt down the killer, and Seph enlists the help of her wærewolf friends--including Johnny, the hunky 6'2" leather-clad singer for the techno-metal-goth band Lycanthropia. The attraction between them is dangerous, but nothing could be as lethal as the showdown that awaits them.
Website: www.authorlindarobertson.com  (see contact page for contact form)
Facebook:
Interact:   authorlindarobertson
Fan page: lindarobertsonbooks
Twitter:   @authorlinda
Goodreads: LindaRobertson

GIVEAWAY: Comment with your answer to the question below for a chance to win an ebook of Jovienne from Linda! PLEASE include an email or link to your FB profile in your comment so we can find you to give you your prize. The winner will be announced early next week. I'll post the winner in the comments here and on Facebook so remember to check back!

You finally have your angel wings. Where’s the first place you fly to?
Posted by MFox at 7:45 AM