*EXCERPT* Song of the Soul by Lisa Kessler 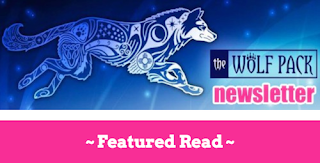 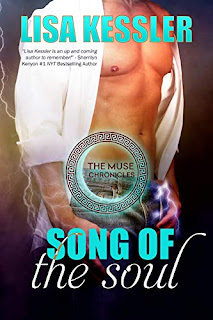 Mikolas has been working behind enemy lines to protect the Muses, but Trinity, the Muse of Music, awakens something inside of him, a primal need to protect her. Trinity has already lost two of her Muse sisters to the Order of the Titans. Just because the sexy Greek billionaire claims to be her Guardian doesn’t mean she can trust him.

The new sound system for the theater was installed, tested, and tweaked, and now Trinity treated herself to a little escape from reality. The tech left, and she put on her headphones, gripping the earpieces on either side of her head. With her eyes closed, the symphony of sound embraced her, swamping her senses in the glorious melody of Mozart’s “Queen of the Night” aria. The high notes pinged with perfect clarity, dancing across her soul, alert and awake.

Suddenly she sensed she was no longer alone. She spun around in the sound booth chair to find Mikolas leaning on the doorframe, his forearm up by his head and a hint of a smile on his lips.

She’d been thinking about him earlier in the day while Clio had been peppering her with questions. Being the Muse of History, after Clio discovered the prophecy of the Guardians, she’d switched focus to researching each of the muses and their original partners in mythology. She had thought it might help them find their Guardians. It had worked for a few of them, but Trinity was another story. Euterpe’s mate was Strymon, a mighty river god and king. Mikolas was from Greece, but he didn’t have anything to do with a river and he was far from a king.

She crooked her finger, beckoning him over, and took off the headphones so she could turn one and press it to her ear, and put the other one to his ear. They hadn’t known each other long enough for her to know what type of music he enjoyed, but he didn’t seem to have an aversion to Mozart. The shared headphones kept him close enough that she could feel the heat coming off his skin.

He turned a little toward her. “Didn’t take you for an opera fan.”

She chuckled. “Muse of Music here. It’s tough for me to find a genre I don’t like. Do you like opera?”

“Yes.” He closed his eyes, listening. “My nona raised me on classical music.”

The aria ended, and Trinity lowered the headphones slowly, her gaze wandering over his face. He had a strong chiseled jaw, a gentle mouth, and dark eyes she could lose herself in. She swallowed the lump in her throat. “I was going to finish putting on outlet covers backstage.”

She nodded without putting any distance between them. “That’d be great.” Gods, he smelled good. “But before we go get to work, can I ask you something?”

“Yes.” His voice had dropped to a throaty whisper that had heat coiling low in her belly.
For a second, she couldn’t remember what she was going to ask, then blurted out. “Halloween.”

He chuckled. “Not what I was expecting.”

She grinned and straightened up, regretting the space between them instantly. “Sorry. In all the Titan craziness, I forgot all about it, but Maggie, Mel and Nate’s daughter, is ten, and this is a major holiday in her world. In spite of Kronos breaking free, they don’t want to cancel the party, and Erica said I should invite you since everyone else will be there.”

He stared at her for a moment, and then stood up. “I wouldn’t want to intrude.”

She frowned and followed him to the door to the sound booth. “Wait, what?” She caught his arm.

He turned around, his eyes locked on hers. “Tell Erica I said thanks for the invite.”

Trinity raised a brow. “I’m the one who asked you.” Her hand found a place on her hip. “Aren’t you the one who has been pushing me to trust you?”

Trinity frowned. “What am I missing here?”

He ran his hand back through his hair, the wavy curls refusing to be tamed. “Is it that hard to understand? If you’re asking me to go because you’d like me there, you might get a better response, but if you’re only doing this because your friend pressured you, then…I’ve got plenty of other things I can do instead.”

Trinity sighed and pulled him back into the booth. She sat down and pointed to the other chair. “Can we talk?”

He took the seat, but apparently, he was going to let her do the talking.

Trinity cleared her throat. “It was kind of shitty that I made it sound like I was only inviting you because Erica wanted me to.”

He nodded slowly, but the corner of his mouth twitched—a crack in his butt-hurt armor.

Trinity shrugged. “I don’t mean to constantly push you away, but in my defense, until very recently, I thought you gave the order to try to kill me.”

He uncrossed his arms, resting his forearms on his thighs as he leaned forward. “And part of me, the part that still mourns Nia, feels like I deserve it.” He shook his head, his gaze falling to the floor. “Can I be honest with you?”

“I’m a fan of honesty.” She gripped the sides of the chair.

He lifted his head, his brown eyes melting her where she sat. “My grandmother called me this morning and something she said has been bothering me.” He focused on his hands. “She told me that love is the only thing worth fighting for.” A sad chuckle escaped him as he met her gaze again. “But I’ve spent my whole life devoted to a sense of duty my grandfather planted in me when he explained I’d been marked by the gods.”

He focused on his shoes. “I’m trying to tell you that I’ve never been in love. I don’t know a damn thing about it. But when I think about Ted being the lucky son of a bitch who earned yours, I want to beat the living shit out of him for hurting you. The entitled prick had no idea what a gift he’d been given.”

Tears stung Trinity’s eyes as she reached out to cup his face in her hands. She waited for him to look at her, and she searched his eyes—for what she wasn’t sure. Slowly, she leaned in closer and closer until her mouth was on his.

His lips were tender but strong, and they tasted sweet with a hint of salt—delicious.

Every caress made her ache for more. His hands slid up her legs and around her back, rolling her and her chair closer to him. She tilted her head as his tongue parted her lips, exploring her mouth. Her fingers tangled in the back of his hair as their kiss grew more urgent. He held her tighter until she abandoned her chair for his lap, straddling him. His hands slid farther up her back, his fingers wide and possessive, singeing her skin with a desire she’d never known before. She ground her hips against him, enjoying the growl in his throat as his erection pulsed in his jeans.

Trinity was off his lap and a couple of steps away in a heartbeat as she spun around to find Clio in the doorway. “Hey, Clio. Um. What’s up?”

Other than Mikolas. Thank the gods she’d managed to keep that in her inside voice.

Clio wasn’t a virginal saint, but she was still the youngest of their muse sisters and the flush of color in her cheeks made it clear she hadn’t meant to interrupt them.

“I…uh…” She glanced at Mikolas. “Hi.” Her gaze snapped back to Trinity. “Mason left one of the drills on the stage with the rest of the electrical socket covers. He just wanted to be sure you knew it was there.” She shifted her weight with a sheepish grin. “I better go see if he needs any help with the outside lights. Sorry about my timing.” She cringed. “I should’ve knocked.”

And then she was gone.

Trinity slowly turned toward Mikolas. He smiled up at her from under his thick black lashes. “How about I buy a lock for that door?”

She laughed. “Good plan.” She released a pent-up breath, rubbing her hands down her pants. “For a guy who claims to have never been in love…that kiss was… Yeah.”

“I was inspired.” He chuckled, his smile taking on a sexy tilt that had her pulse racing.
“And I said I’ve never been in love before.” He stood up and took her hand. “Never claimed to be virginal.”

“Point taken.” Trinity pulled him out of the sound booth and headed down toward the main theater. She looked back at him. “Thanks for what you said back there. Maybe I really don’t know much about love, either.”

He lifted her hand to his lips and brushed a kiss to her knuckles. “Is that invitation to the Halloween party still open?”

“Yes.” She jogged up the steps to the stage and picked up the drill. “I hope you’ll come. And it has nothing to do with Erica.”

He climbed the stairs and took her free hand. “I’ll be there.”

And something about the way he said it implied so much more than the party.
Posted by Ronda at 11:43 AM