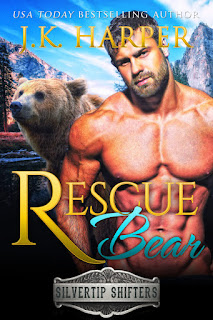 When Haley's life imploded, first she hid for a long time. Now's she's finally on the upswing again, ready to create a new life for herself and find her balance. Leaving everything behind for a fresh start, she landed in the mountain shifter town of Deep Hollow, home to the Silvertip bear clan. She's never before met a bear shifter. But when she meets mammoth-sized, impossibly attractive Cortez Walker, everything she ever thought she knew about men is turned breathtakingly upside down from his first inviting smile.

Cortez is a thrill-seeker who used to live life on a risky edge. But a terrible accident proved that everything can change in a split second. Haunted by his failure to protect those who needed it, now he struggles to find peace again even as he doubts everything he's ever been able to do. Then he meets Haley. Now he faces the biggest risk of all: opening his heart and claiming her as his mate. He's up to the challenge—but first he'll have to prove he's ready to be her rescue bear.

One pivotal scene could alter the course of Haley Adams' entire life. It needed to be the best damn one she'd ever written.

Fingers poised over the keyboard, immersed in the climax of the book in which the heroine was about to rescue the hero after he'd been cold-cocked by the bad guys when he'd come to rescue her, her pulse thrummed wildly. This was it, the magic was about to happen, she could just feel i—

“Shit!” Haley whacked her knee on the underside of the table and almost fell out of her chair.

Someone pounded on the front door so loud it sounded like they were planning to bring the thunder right into the house. Her heart joined her pulse, galloping hard enough she was half afraid it might jump out of her chest. She looked at the big grandfather clock in the corner of the living room. Six-thirty in the morning. Who was out there scaring the crap out of her at freaking six-thirty in the morning? Making her lose focus on the book she had to finish, or else she'd lose the tiny toehold she'd fought so hard to gain during this past year of shitasticness?

A-ha. She remembered now. The property manager had told her he would come over today to fix a slow leaking pipe in the upstairs bathroom. Great. She hadn't thought he'd meant this early. Or that he wouldn't call her first to let her know he was on his way. Sighing as real life took over the made-up-but-oh-so-real-feeling one she'd been working on, she took a quick glance down at her clothes.

Oh, fabulous. She was wearing her favorite ratty orange robe over her fleece jammy bottoms, the red ones that had little purple and black penguins sprinkled all over. Better yet, she also had her big old fuzzy moose slippers, complete with antlers and huge eyes, shoved onto her feet. They were her good luck ones that she liked to wear when she was writing.

Oh, well. She'd met the guy the day she came to town, when he'd shown her the house she would be sitting for a year while the owners, his parents, traveled around the world. He had struck her as polite, professional, and totally uninterested in her. Which was completely fine by her. After she'd had her entire life blown up last year, men were the last thing on her mind. All she cared about right now was working hard to write the best damned book of her career. It was clear all he cared about was making sure any handiwork that needed to be done to his parents' house while they were gone got taken care of. So neither one of them should care about her hair or her unfortunate choice in sleepwear. Plus, it was six-thirty in the morning. What else should she be wearing?

Automatically smoothing her hands over her hair anyway, she frowned harder as she realized it was in a ridiculously messy bun caught at the nape of her neck. Great. But she shrugged as she went to the door. Writers at work looked scruffy and neglected sometimes. Dude would have to deal.

BAM BAM BAM! She jumped again mid-stride as the pounding sounded once more, even louder. It sounded like it could crack the door in two.

So rude. Now she was just plain irritated. "Hold your horses!" As she yanked open the door, she started to say in a pointed voice, "You know, there's a perfectly good doorbell—oh!” She chopped off her words. “You're not the property manager." She stared at the mountain of a man standing outside the door.

Big, huge mountain man with golden-brown eyes and muscles that bulged out even from beneath his tawny shearling jacket. Hoooly shit. He was really, really big. Light brown hair cropped close, a bristly beard that spread over his lower cheekbones and chin that she really wanted to scrape her fingers through to feel the scratch of it, eyes that gazed steadily at her from beneath a tussle of eyebrows. Jeans that fit him well, scuffed up but nice cowboy boots on his feet, a collared blue checked shirt that opened up just enough at his neck to show skin. Did she mention that he was huge? He took up the entire doorway, which was already supersized. Wow. Bear shifters sure did make for big humans.

He stared back at her, seeming just as surprised to see her. A beat up black toolbox he held in one hand bumped gently against his thigh. There was a moment while they both just looked at one another, Haley's mouth open. Finally he shook his head, still looking at her like she was spotted with purple dots. "Not the property manager, no. I'm his brother. Cortez. He had something come up, couldn't make it. Said there's a leaky pipe that needs fixing?" His voice rumbled through her like dark gravel, shuddering through her body and sending sweet chills dancing up and down her skin that had nothing to do with the cold air outside.