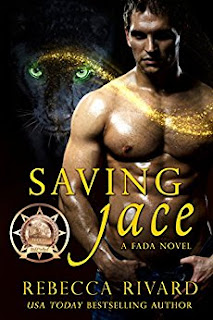 A black panther with a scarred heart. A gutsy waitress trying to hang onto her dreams. And the Darktime isn't over...

Jace set a hand on the small of Evie’s back and steered her down the hall. The moment they were in the bedroom, he backed her up against the door, framed her face with his hands and kissed her, hard and deep.

Evie’s head swam. She gripped his waist and hung on as her heart pounded in her ears. He moved his mouth to her neck and nipped the beating pulse, sending a jolt clear to her womb.

“Goddess, I want you.” A harsh growl against her skin.

She drew a serrated breath. “Me too.”

He didn’t need to ask twice. She slid her fingers into his hair and dragged his mouth down to hers. Kissing him with all the hunger in her heart. Sucking his tongue into her mouth. Nipping his lips. Sliding a hand down his back to squeeze one of his firm buttocks.

His breath sped up. His hips moved, pressing into her belly. She could feel his cock, thick and ready.

He removed her arms from his neck and pressed them against the door, her hands on either side of her head. “You’re mine, Evie.” His eyes seared into hers, dark gold touched with the green of his cat.

“I’m an ass. Now say it.” He nipped her jaw, and pleasure jolted straight to her clit. “I want the words. Just for tonight.”

“Or else what?” Her jaw jutted. Because that had hurt, what he’d said about the two of them not mixing. She might have her own doubts, but not because he was a fada.

But you agreed, a little voice reminded her.

He lifted a single black brow. “Are you teasing a cat?”

She moistened her lips, but she was damned if she’d back down. “Yes.”

“Oh, baby,” he crooned in a dark voice that made her inner thighs clench. “Then you better be ready to play.” He captured her wrists in one hand and held them above her head, while with his other hand he undid her shorts. “Or else what?” he repeated. “Maybe I’ll keep you against the door until you beg to come.”

She slid him a look from under her lids. “Maybe I’d like that.”

He chuckled and skimmed his fingers under the waistband of her panties. She was wearing her only sexy underwear—black satin with a touch of lace and a bra to match.

His heated gaze took in the black lace against her cream-colored skin. “Did you wear these for me?” When she nodded, he murmured, “Good girl. Now say it, Evie.”

But as soon as she opened her mouth, he covered it with his as if afraid to let her speak. Her heart lurched as she realized he didn’t expect her to say it. He kissed her as if he were aching as much as she was, his tongue curling over hers, taking her deeper by slow degrees. Meanwhile, his fingers slid deeper into her panties, teasing her sensitized flesh until she was breathless and aching.

She wanted to touch him. Her hands jerked in his grip but he wouldn’t let her go. He kept them pressed to the door above her head and continued kissing her until she was dazed, her legs like limp noodles.

He lifted his head, his expression hard and a little wild, and she knew his cat was inside, looking out. He squeezed her bottom. “You’re a bad girl to wear these tight little shorts. All day, I kept looking at your ass and picturing what I was going to do to you when we were alone. I swear my cock was hard the whole fucking day. And this shirt…” Long, work-roughened fingers stroked her belly. “The way you keep flashing me. It’s enough to drive a man insane.”

She laughed up at him, but God, he was making her hot. “I wasn’t flashing you. All you could see was my stomach.”

“You think that isn’t bad?” He released her wrists and jerked up her T-shirt to expose her breasts. “I wanted to taste you, lick you, and then move up your stomach to your hot tits.” He pinched her nipples through the black satin…and then his mouth was on her and he was sucking the points to hardness.

She cupped his head, holding him close. His mouth was warm and wet. Each hot suck shot straight to her womb.

She moaned, and he gave a sexy rumble in response. From her breasts, he moved his way lower, trailing a searing line of kisses down her abdomen until he reached her mound.

“Mine,” he growled against her panties. He pursed his lips and blew a hot stream of air into the satin right above her clit. “Say it.”

She whimpered and pressed her palms against the door, her body straining to him. “God, yes. Please.”

He stilled. Slowly his eyes turned up to hers, so that she felt like prey. Sexy, not-even-going-to-try-to-run prey. Then his lips curved in a wicked smile.

“But I’m still going to tease you…because we both like it.”
Posted by Ronda at 12:03 PM