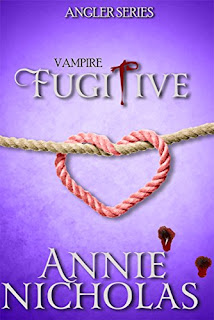 That’s me -- with a ten-million-dollar bounty on my head. My home was attacked and I escaped, but I don’t know what happened to my family. Every vampire in the world is hunting me. With no money, no passport, and no allies, I stowed away on a ship and landed in New York. Rumors are the overlord of New York is a real sadist. A Nosferatu warrior named Mutt. And he’s the only one who can help me save my family...

Shoes scraping over the asphalt, wind in my long hair, sweat trickling down my spine, lungs burning. There to my left was an outdated brick apartment building that the GPS declared as my destination. I hit the door at full speed and tried the knob, but it didn’t budge.

I scanned the names listed by the door. Red, Red, Red. Where was it? There it was. Thankfully, he still lived here. I buzzed for entrance.

The speaker squawked before a gravelly voice answered. “Who’s there?”

“It’s Mutt.” A deep male voice spoke from behind me.

I spun around, stake grasped in both hands. I plunged forward, throwing my weight behind it.

Smooth as silk, he sidestepped out of my way and plucked the stake from my hands. “Careful, you might poke your eye out with that.” He slipped my stake into a holster he wore around his shoulders.

The door buzzed and the vampire held it open for me. “Ladies first.”

“I don’t think so.” My heart hammered so hard I feared it would bruise my ribs. I had led a vampire here. He had taken my only weapon. What now? I really needed a break. It seemed for every step forward I took, fate shoved me back three steps. My eyes burned but I refused to shed a tear. My birth parents were probably dead and my adopted father was missing. Broke, hungry, and…tired of running. “Wait…” I glanced at the speaker. Red had buzzed the vampire in, not me. I hadn’t had a chance to even speak.

The slayer I wanted to meet knew him. When had vampires and slayers become friends? Something was amiss and I had no other choice but to figure it out.

“I’m not going to wait here all night, sugar. Are you coming in or not?”

I passed through the door and climbed to the third floor, dogged by the vampire the whole way.

“Do you have a name?” He walked so close I was surprised he didn’t step on my heels.

He waited. And waited. “Is it a secret?”

He had no idea. That was good. How could he be involved with the ambush on the dock if he didn’t know who I was? Too many unanswered questions. “Why were you at the harbor tonight?”

I ground my teeth. We were going to get nowhere. He didn’t trust me and I couldn’t trust him any further than I could throw him. And I really, really wanted to throw him. Right out that window at the top of the stairs...